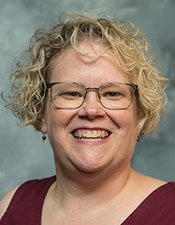 Beth Greene Costner has been named dean of Winthrop University’s Richard W. Riley College of Education following a national search. Costner has served as interim dean of the college since January.

Provost Adrienne McCormick shared that Costner is highly regarded by the students, faculty, and staff of the Richard W. Riley College of Education. “Our education and exercise science programs are all leaders in the state,” McCormick noted. “Costner's extensive experience in management, assessment, accreditation, grant-writing, interdisciplinary collaboration and student success programming will position us well as we identify ways to continue strengthening our diverse programs in the college.”

Costner earned tenure and was promoted to professor in Winthrop’s Department of Mathematics where she also served as chair from 2008-13.  In addition to her recent role as associate dean in education, Costner served as assistant and associate dean in the College of Arts and Sciences from 2010-15.

While at Winthrop, Costner has secured more than $3 million in grants, including the Winthrop Initiative for STEM Education, which is a National Science Foundation Robert Noyce Scholarship project that supports the recruitment, retention and development of science and mathematics teachers.

In addition to efforts directed toward teacher development, Costner has led a number of initiatives related to student services, assessment and accreditation. In the area of accreditation, she served as the lead author on the most recent review of the educator preparation programs at Winthrop that resulted in reaccreditation in 2020 with no areas for improvement.