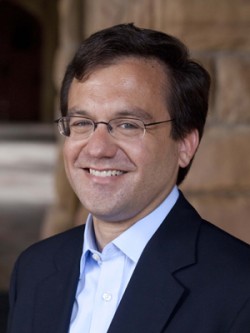 The Carthage Board of Trustees has unanimously elected John R. Swallow to serve as president of the College.

President-elect Swallow brings an entrepreneurial approach and highly relevant experience as a senior administrator, trustee, and faculty member at three small, private liberal arts institutions. He comes to Carthage from The University of the South, known informally as “Sewanee” for the Tennessee community in which it’s located.

As chief academic and operating officer, he has overseen notable strides in the university’s curriculum, fundraising, equity and inclusion, enrollment, student life, faculty and staff development, and strategic planning.

He becomes the 23rd president in Carthage’s 170-year history, succeeding Gregory S. Woodward. After a distinguished five-year term, President Woodward is leaving to assume the presidency at the University of Hartford in his Connecticut hometown.

President-elect Swallow plans to take office in July. He arrives at a time of unprecedented prosperity for the College, evident in its record enrollment, 30 consecutive years of operating surpluses, and $200 million investment in campus facilities since 1999.

“I was immediately drawn to Carthage College as one of so few liberal arts institutions that can claim both long-standing excellence and profound momentum,” President-elect Swallow said. “Carthage’s deep heritage, exceptional faculty and staff, and state-of-the-art facilities are a special and rare combination, and the opportunity to lead Carthage to become ever stronger was truly captivating.”

The hire caps a nationwide search that esteemed firm Myers McRae coordinated with input from Carthage faculty, staff, students, and trustees. Echoing a hearty recommendation from the search committee, the board voted at its May meeting.

“I am proud to welcome John Swallow to Carthage as our next president,” said Ambassador David A. Straz Jr., chairman of the board. “The breadth and caliber of his distinguished career at prestigious liberal arts colleges has prepared him for this outstanding opportunity.”

Enrolling at age 15, President-elect Swallow graduated from Sewanee in 1989 with honors in both mathematics and English literature. He went on to earn two master’s degrees and a Ph.D. in mathematics, all from Yale University.

Joining the faculty at Davidson (North Carolina) College in 1994, he taught there for 17 years — 10 of them in an interdisciplinary humanities program. He was elected leader of the faculty, and students honored him with the Omicron Delta Kappa Teaching Award in 2010.

His combination of analytical and communication skills impressed Carthage faculty. Aaron Trautwein, a professor on the presidential search committee, attributes that to the incoming president’s dual interests in the sciences and humanities.

“He has a very authentic voice,” Prof. Trautwein said. “He sees the world through many lenses. It’s really powerful to have someone who can do that.”

President-elect Swallow returned to his undergraduate alma mater in 2011. He was appointed Sewanee’s provost the next year and its executive vice president in 2014.

He holds responsibility for the institution’s strategic planning and execution, day-to-day operations, and operating budget. Under his leadership, applications increased by 63 percent and diversity among the faculty rose to 18 percent, in line with the student body.

Externally, he embraced the unofficial role of “deputy mayor” in Sewanee by overseeing its downtown planning and partnering with civic groups on park redevelopment and other community projects.

“His experience in innovative and interdisciplinary approaches to teaching and problem-solving, his commitment to community, and his vision for educating our students in a global world make him the perfect leader to continue the tremendous momentum at Carthage,” Ambassador Straz said.

Even before joining the administration, President-elect Swallow took an active role in Sewanee’s governance as an elected trustee and, later, regent. He moved to cut tuition and fees by 10 percent, which contributed to a spike in visits, enabled admissions officers to more selectively screen applications, and raised the university’s public profile.

More recently, he served as a trustee at Agnes Scott College in Decatur, Georgia. In 2015, the women’s college implemented the SUMMIT curriculum, which features global learning and leadership development and pairs each student with a personal career mentor and board of advisors.

President-elect Swallow has written articles in The Chronicle of Higher Education and The Huffington Post, plus an undergraduate textbook and more than two dozen research articles in mathematics.

“Our faculty will really respect that he’s a scholar-teacher,” Prof. Trautwein said. “He’s an experienced researcher who also knows how to relate to students. That’s something we want all faculty members to model on campus.”

President-elect Swallow’s wife, Cameron, is a high school math and English teacher. They have two children in college: Ruth, 20, and Sophie, 18.

Besides the similarities of the institutions, he was attracted to Kenosha’s size and the chance to move closer to relatives in the Chicago area.

“Cameron and I are thrilled to join the Carthage community,” President-elect Swallow said. “The Carthaginians we met demonstrated such a genuine welcome, and such a deep commitment to transforming the lives of students, that we knew we had found the right place for us for many years to come. We simply can’t wait to get started.”