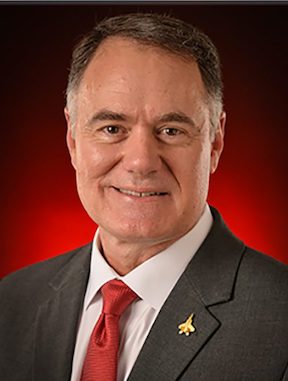 Retired Air Force Brig. Gen. Richard H. Boutwell, a 1991 Troy University alumnus, has been named the University’s Senior Vice Chancellor for Advancement effective Jan. 1. His new role will include responsibility for governmental relations, development/alumni affairs, public affairs, and strategic oversight of the University’s relationship with all branches of the military services.

A native of Greenville, Ala., Boutwell succeeds Maj. Gen. Walter Givhan, USAF ret., in the position. Retired TROY administrator Dr. John Schmidt had served in the role on an interim basis.

“Gen. Boutwell brings a wealth of leadership skills and passion to this position,” said Dr. Jack Hawkins, Jr. “He excelled in every assignment during his U.S. Air Force career, and was chosen to fly as a member of the elite Thunderbirds squadron, known as the world’s most advanced aviators. His wife Leslie and his daughter Hailey are also TROY graduates, and the Boutwells have a deep appreciation for the opportunities afforded them through their Troy University education.”

Boutwell retired in 2021 after nearly 30 years in the Air Force, most recently serving as Deputy Commanding General of the Fifteenth Air Force where he led the largest Department of Defense’s Numbered Air Forces, comprising over 47,000 employees and $600 billion in the USAF’s most advanced weapons systems.

Boutwell earned his bachelor’s degree in Physical Education from TROY (’91) and earned master’s degrees in Military Operational Art and Science from the Air Command and Staff College (’04) and National Security Strategy from the National War College (’10).

He has received the Air Combat Command’s Installation Excellence Award as Wing Commander, the Air Force/Air Combat Command Top Unit Awards as Wing Commander and was a Troy University Alumni of the Year Award recipient in 2017. He was inducted into the Texas Aviation Museum’s Wall of Honor and was a Distinguished Graduate of the Reserve Officer Training Course, the Undergraduate Pilot Training, the F-15C Formal Training and Squadron Officer Course. He was also the Top F-15C air-superiority student for 1993.