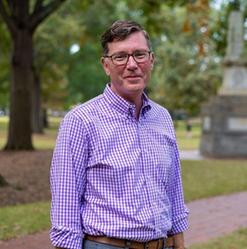 As press director, McGandy will define, plan, and oversee the press publishing program to further its mission to publish high-quality, peer-reviewed books that address national and global issues and illuminate the history and culture of South Carolina and the American South. Building on former press director Brown’s success fostering professionalism and building strong infrastructure at the press, McGandy will lead editorial, fiscal, and marketing strategies to uphold the distinction and intellectual integrity of the press and elevate its reputation at the national level. He commented, “UofSC Press is a place where I will bring my expertise in developing publishing programs, my extensive networks and strong reputation in scholarly communities, my commitment to diversity and inclusion, and my passion for building partnerships so as to help UofSC Press flourish in the 2020s and beyond.”

“I look forward to the innovative leadership that Michael is sure to bring to our press as director,” UofSC Provost Donna Arnett said. “Alongside our talented team, Michael will ensure that our press maintains its stature as one of the oldest and most distinguished publishing houses in the South, while also propelling it forward with the innovative thinking that is needed in today’s evolving industry.”

“Nonprofit and university press publishing is, indeed, an industry,” McGandy said. “My time in trade publishing has situated me well to develop the UofSC Press program from a business perspective.”

McGandy’s publishing career began in New York City in 2000 as associate editor for Macmillan Library Reference/Thompson Media. He then took his talents to W. W. Norton & Co., first as associate managing editor and later associate editor in the Professional Books Division. His acquisitions and book development work continued in his role as acquisitions editor at the Manhattan office of Rowman & Littlefield Publishers.

The university press publishing world welcomed McGandy in 2008 when he became acquisitions editor and later senior editor at Cornell University Press in Ithaca, NY. There, he created, launched, and was editorial director at Three Hills, the regional trade imprint of Cornell UP. In his 14-year tenure at Cornell UP, he developed a successful and prize-winning list of books in US history, urban studies, and New York state topics. His other accomplishments include the acquisition of New York History journal and the initiation of a state-based textbook program.

“I have a strong editorial vision for UofSC Press,” McGandy added, “one that builds on the press’s recent growth, reflects my industry experience, and is predicated on publishing books that matter.” Going forward, he plans to prioritize books with popular appeal plus the authority of serious, scholarly literature. “For those books that take risks and say things that might provoke some people in the public sphere,” he explains, “having that authority behind them is really important.”

In his own field of expertise, McGandy, who holds a doctorate in philosophy, has direct experience of academic practice and how good scholarship can affect public life and critical conversations in various communities. “I know scholarship relates to citizenship,” he observed, “and university presses are key intermediaries connecting research with practice in the public sphere.”