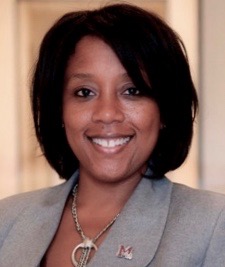 Kimberly Conway Dumpson, Esq., CFRE, has been selected to serve as Vice President for Advancement at Rhode Island College. Her 20-year career includes more than 15 years of experience in non-profit and higher education fundraising.

A former practicing attorney, Ms. Dumpson currently serves as the Executive Vice President and Chief of Staff at the University of Maryland Eastern Shore in Princess Anne. Over her 13-year career at the university, she has held progressively responsible roles, including Vice President for Institutional Advancement, Director of Alumni Affairs and Planned Giving, Adjunct Professor, and Interim Director of Alumni Affairs and Planned Giving.

In the non-profit sector, she served as Managing Director and then Executive Director of the Life Crisis Center in Salisbury, Maryland. Additionally, Ms. Dumpson practiced law in Maryland as an attorney with Wescott, Luke and Rowe, LLC, in Salisbury; Gregory K. Wells and Associates, P.A., in Upper Marlboro; and Wharton, Levin, Ehrmantraut, Klein and Nash, P.A., in Bethesda.

Ms. Dumpson earned her Bachelor of Arts degree in political science and sociology at Towson State University and her J.D. degree at Ohio Northern University College of Law. She became at Certified Fund Raising Executive (CFRE) in 2008 and was re-certified in 2011 and 2015.